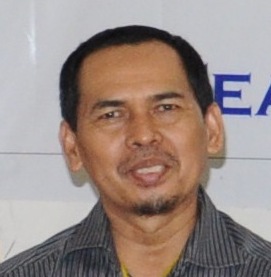 SUDARSONO teaches in Tanjungpura University, Indonesia. He obtained PhD in Linguistics from La Trobe University, Australia. His interests include descriptive linguistics, sociolinguistics, and bilingualism. He published textbooks on Bakatik Dayak Language. He was a visiting senior lecturer in Linguistics for University of Malaya (2009-2011). He is Chair of Masters Study Program of English Language Education, Vice President of ELTeaM, and Chair of IETA West Kalimantan Chapter.

Various stakeholders of Indonesian education show their disatisfaction of the national education outcome. Most school graduates are identified failing in perfoming the intended moral values of Indonesia. This failure is argued due to the recent curriculum mostly focused on academic achievement but ignored the national moral-based behaviours. Due to such a reason, Curriculum 2013 is introduced to replace the previous curriculum, School-based Curriculum (KTSP). The sudden change of school curriculum produces questions how to implement it in a province like West Kalimantan. To have the answers to the questions, a study was conducted to investigate the potential specific contraints encountered in West Kalimantan. The study involved the English teachers who are taking further education in Masters Study Program of English Language Education, Tanjungpura University, Pontianak. The data were collected by distributing questionaires about the potential contraints the parpiticipants might face. The data were then analysed qualitatively. The findings indicate that the teachers are in great contrains although some of them have attended a training specified for Curriculum 2013. The problems concern the practice in the field covering the teaching-learning techniques, materials, assessment, and media. Above all the significant problem deals how to change the teaching-learning behaviours and atmospheres in the classroom from that defined in School-based Curriculum to that in Curriculum 2013.

This site uses Akismet to reduce spam. Learn how your comment data is processed.